The weather continues to get drier this month, but the rising air temperature stalled out by the end of the month. NearSys Station had one frost day in April. There was only 1.3 inches of rain and no snow this month. The ground continued to warm, allowing cold-weather crops to be planted this month. 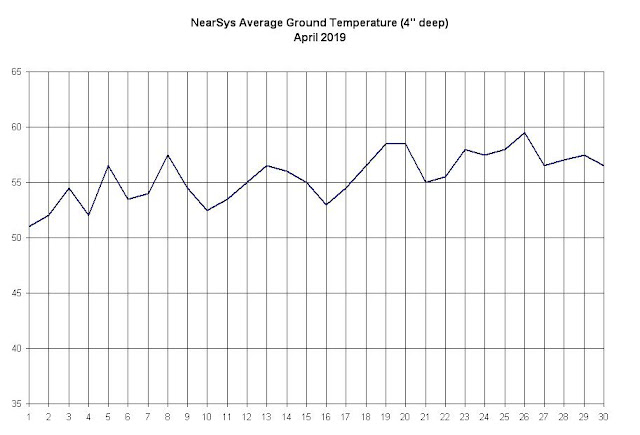 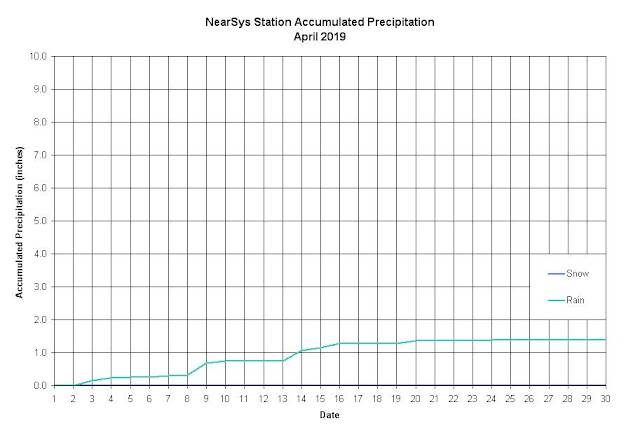 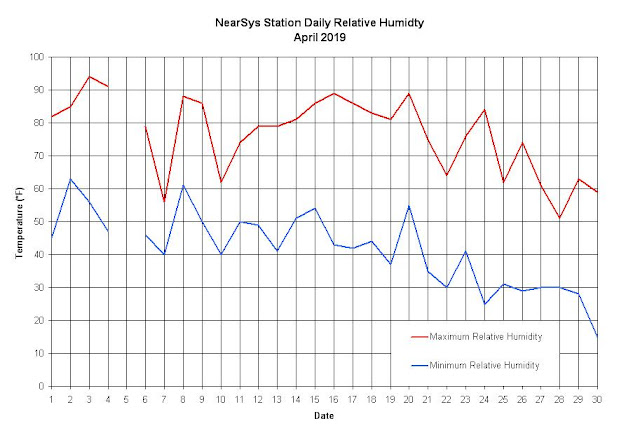 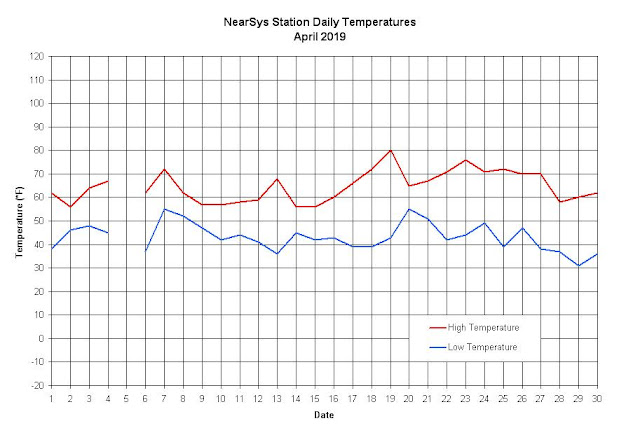 Posted by NearSys LLC at 6:51 PM No comments:

The UAVSonde was launched late in the day because of strong winds. By 20:20, the winds were low enough to safely fly. The visibility is very high, partly because there is so little preciptable water in the air. According to thermal infrared measurements, the air contains 0.31 inches of water.

The images below show the Boise Mountains very clearly. Therefore, the visibility is on excess of 50 miles.

A front came through bring a change in air pressure and temperature. It was heralded by strong winds that kicked up enough dust to lower the visibility from over 50 miles to a little less than 30 miles.

The chart below shows a slight decrease in air temperature and continued low relative humidity. 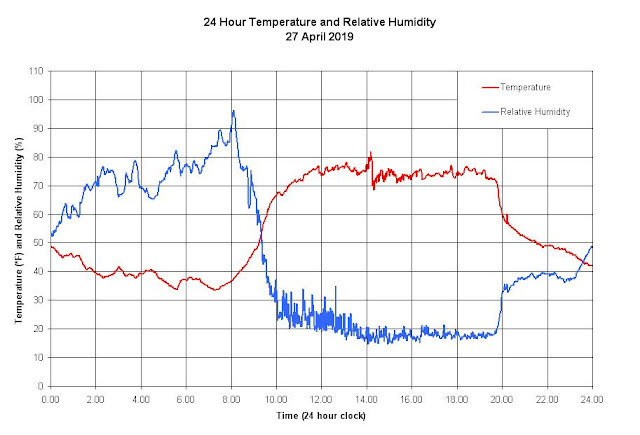 A cloudy day, and it shows in the low values displayed in the chart below. Furthermore, the morning showed more variation in cloudiness than the afternoon. 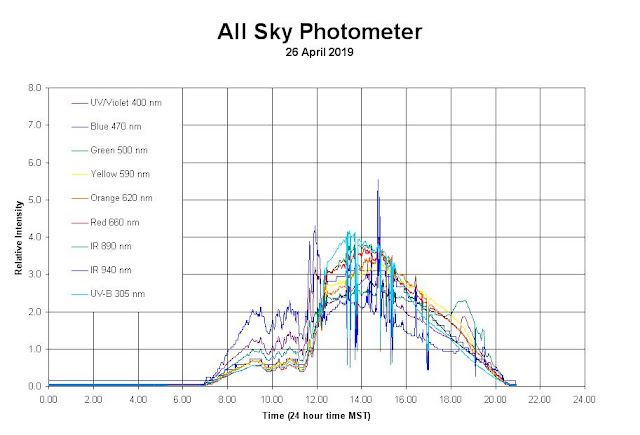 Posted by NearSys LLC at 6:39 PM No comments:

The time stamp for my data is offset from the correct time. I'll need to look into this error at some point. There was one spike in bad air during the week. 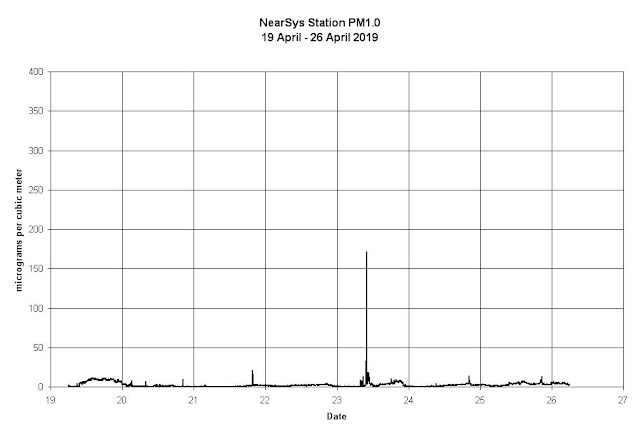 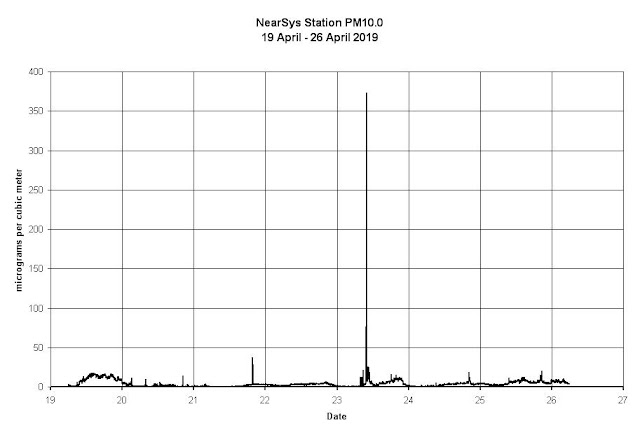 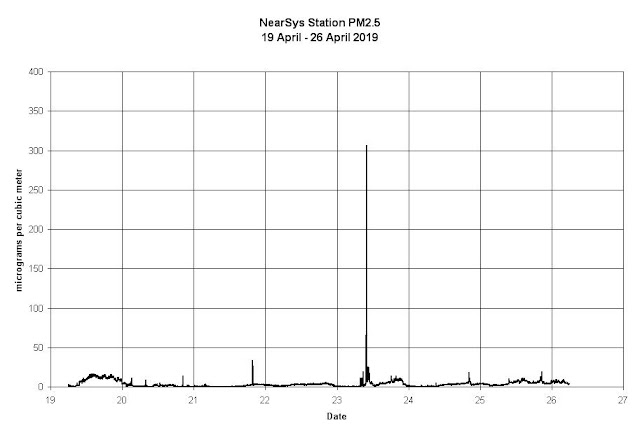 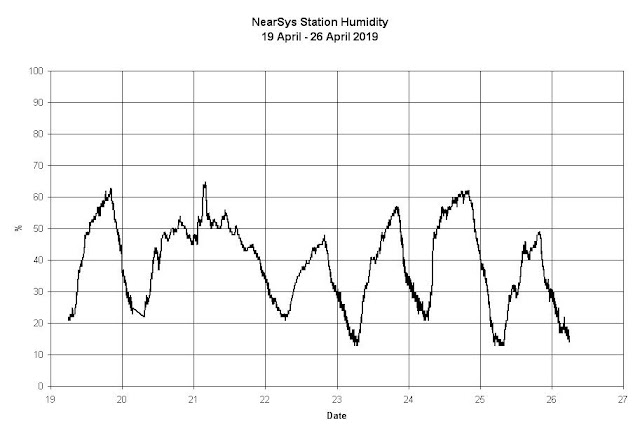 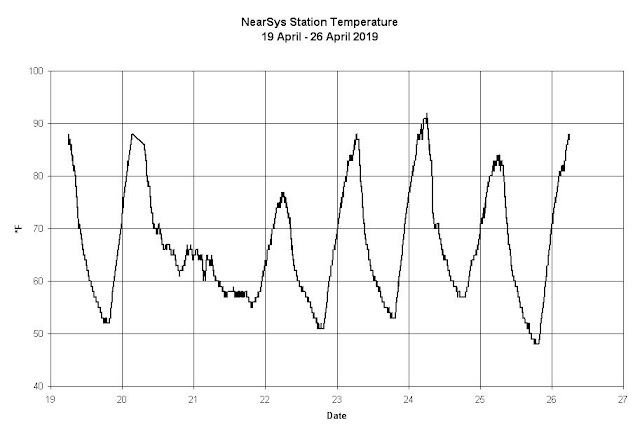 So much wind last weekend! It was impossible to fly the drone until this week. However, the UAVSonde reports that the visibility was in excess of 50 miles.

Posted by NearSys LLC at 6:13 AM No comments:

On the way home from work, I stopped at Lake Lowell again to try my luck with the ROV. This time, I made sure to turn the camera down to a depression angle of 45 degrees. That way, it would have a closer look of the bottom of the lake when it touched down.  Good thing to, it's very dark four meters below the surface.

The second ascent to the surface took several minutes longer than the first because the ROV got stuck at the bottom. Something down there, a piling perhaps trapped the ROV. I was concerned the ROV tether would break and the ROV would remain at the bottom. Fortunately, the cat 5 tether was stronger. However, several thrusters were ripped from the ROV's wet frame.

I didn't discover what trapped the ROV, but I did discover the bottom of Lake Lowell is sandy near the dock.

Dry and comfortable until that brief rainstorm came through at 3:30 PM MDT. We got 0.09 inches of rain from that storm. 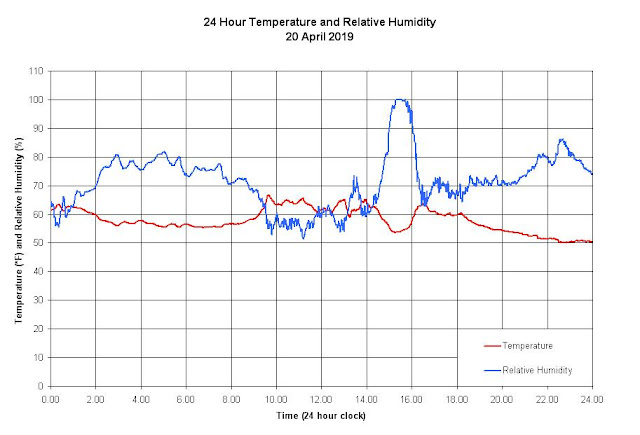 The PurpleAir Air Quality Meter uploaded data most of the week. Below are the charts it created. Notice that the particulate matter charts appear similar. However, they do different in absolute concentrations. 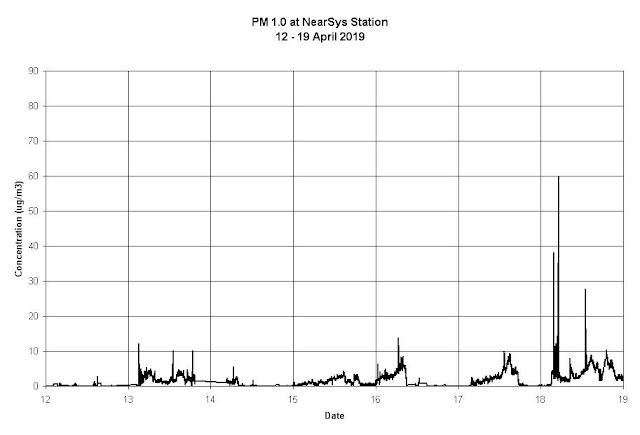 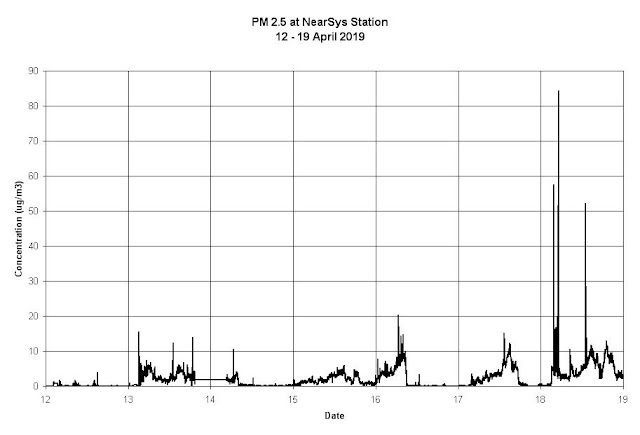 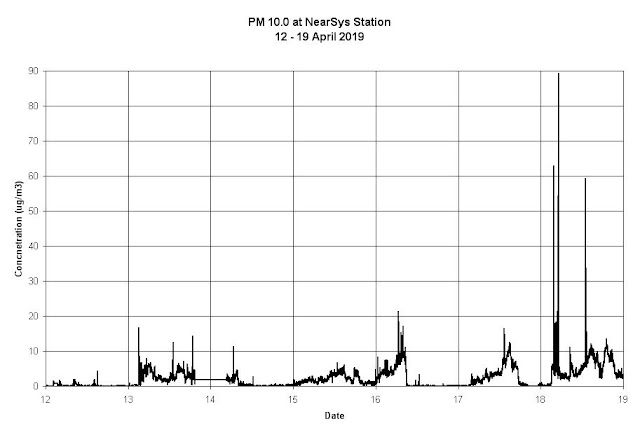 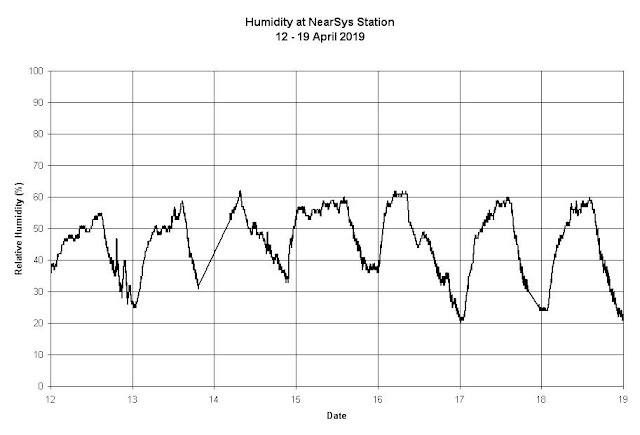 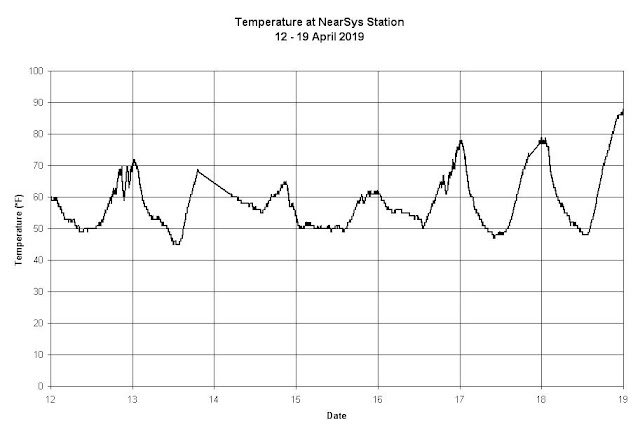 Posted by NearSys LLC at 9:28 PM No comments:

The morning began clear, but you can see after 14:00 MDT, the sky became partly cloudy. 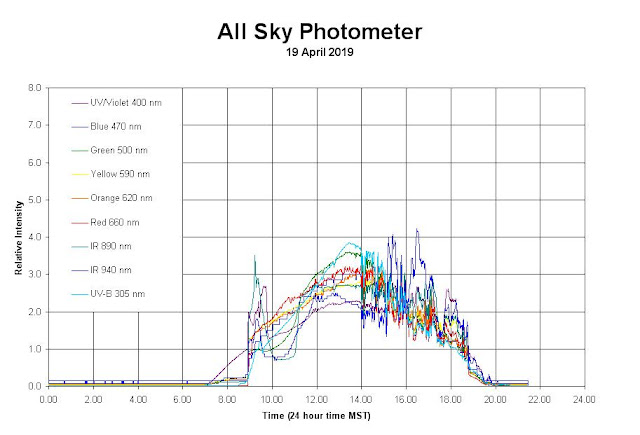 Posted by NearSys LLC at 9:23 PM No comments:

The sunspot is still visible, it hasn't been carried to the far side of the sun by rotation. This time I counted pixels to determine the sunspot has a diameter of 18,500 miles. That makes it 2.3 times larger than Earth. 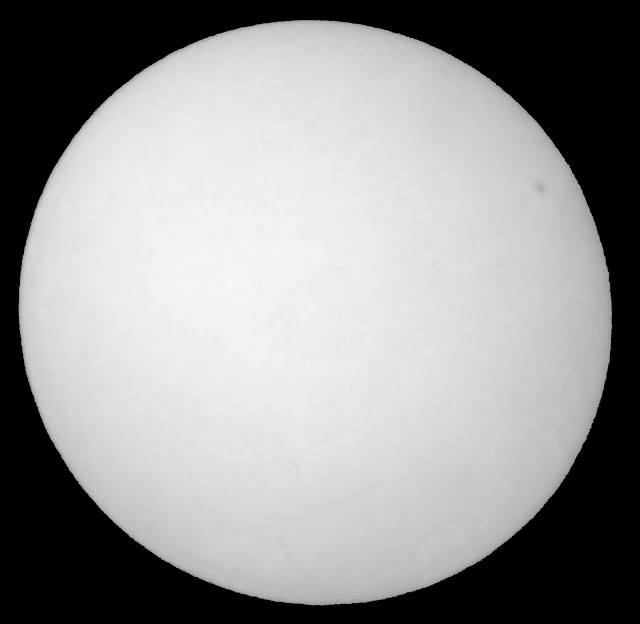 Posted by NearSys LLC at 6:17 PM No comments:

Here's a picture of the new sunspot I took today. Let's see how the weather will let me monitor it.

My hydrogen alpha telescope shows that the sun is otherwise not very active.
Posted by NearSys LLC at 6:18 PM No comments: 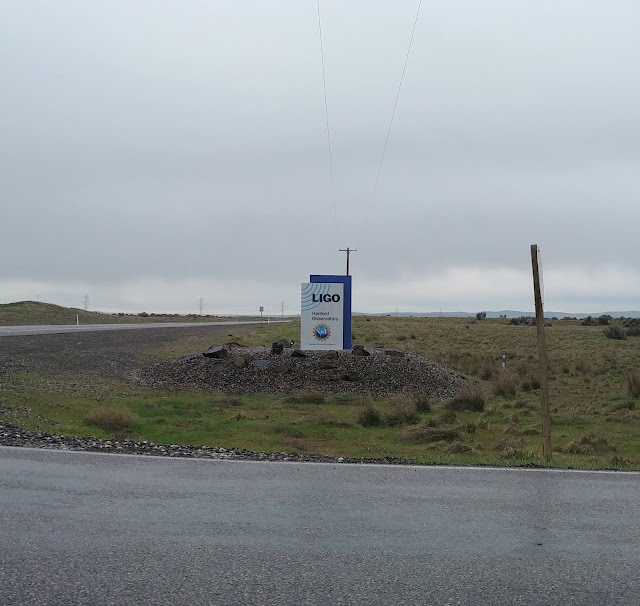 Rachel and I drove out the Richland, WA and the LIGO Visitor Center for a tour. If you're not familiar with LIGO, it's an antenna for recording passing gravitational waves. These were predicted by physicists over 100 years ago and by Albert Einstein's 1915 General Theory of Relativity (although he didn't think they were real initially). 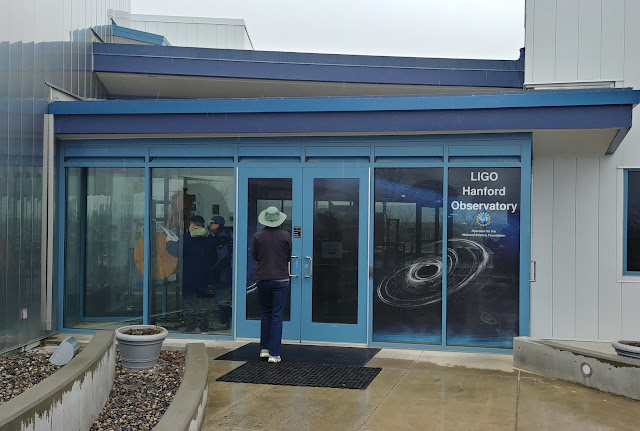 Basically, when a massive object accelerates (either linear acceleration or by changing its direction) it emits gravitational waves. These are a distortion of space-time that can be measured with very sensitive equipment. And guess what is best source of these gravitational waves? Coalescing black holes or neutron stars. The first serious attempt at trying to detect them was back in the mid-1960s by physicist Joseph Weber.

Inside the LIGO Visitor Center is an auditorium playing two videos on gravitational wave detection. Outside the auditorium are displays related to the detector and it's construction.


After touring the Visitor Center, a guide takes visitors on a walking tour to the Control Room and the observatory's arms (these arms contain the over two mile long vacuum tubes which laser light bounces through).


The LIGO Visitor Center is open the second Saturday of the month. Tours of LIGO are given at 1:30 and 3:00 and are free. Even though this site is on or near the Hanford nuclear facility site, you don't need permission or IDs to visit. Tours are about an hour long and have a small amount of walking. There is a minor elevation change during the guided walking tour that most people should be able to handle (wheel chairs?). You can purchase LIGO swag if you go back to Kennewick, at the Tri-Cities Center.

After the tour, you might consider visiting the wineries in this part of Washington. Also don't forget the Chuckar Cherries shop in Prosser.
Posted by NearSys LLC at 1:52 PM No comments:

Good visibility with complete overcast. According to the thermal imager, the clouds are at 7,800 feet. Visibility is in excess of 50 miles.

Posted by NearSys LLC at 1:13 PM No comments:

No funny results during the night this week. Sunny skies result in bright skies overhead. 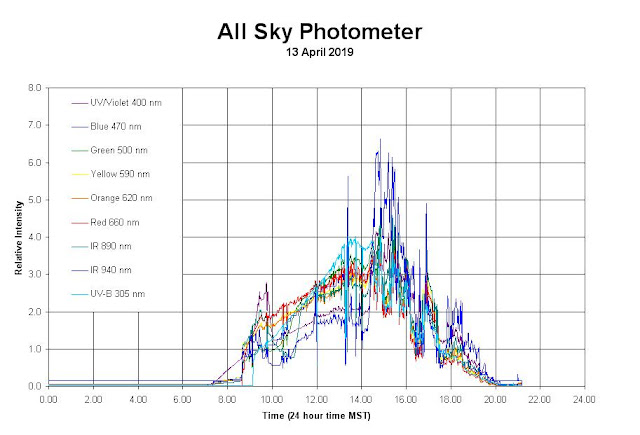 Posted by NearSys LLC at 1:05 PM No comments:

The relative humidity is hitting 100% at night, but the air temperature is on the rise. 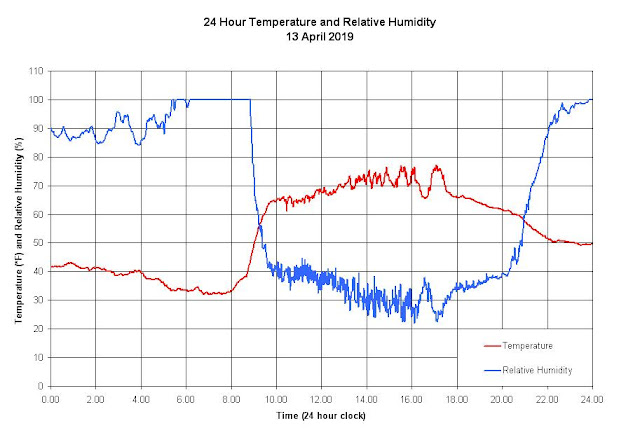 Posted by NearSys LLC at 1:02 PM No comments:

The PurpleAir air quality meter recorded data all last week and much of the data was uploaded to the PurpleAir site. Here are the three charts I created from the collected readings.

It appears the ratio of concentrations of the three particulate matter remained constant between themselves. The absolute amounts did change over last week. 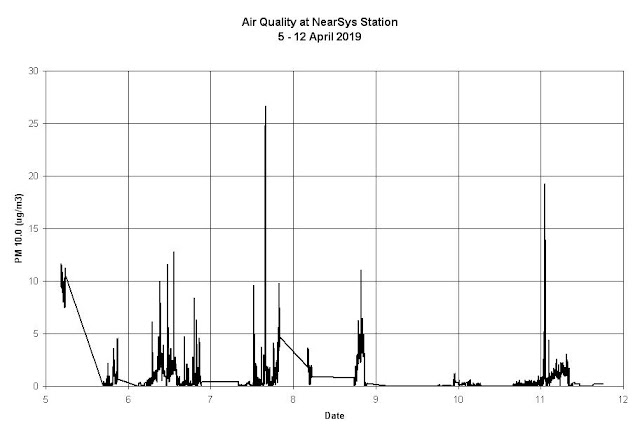 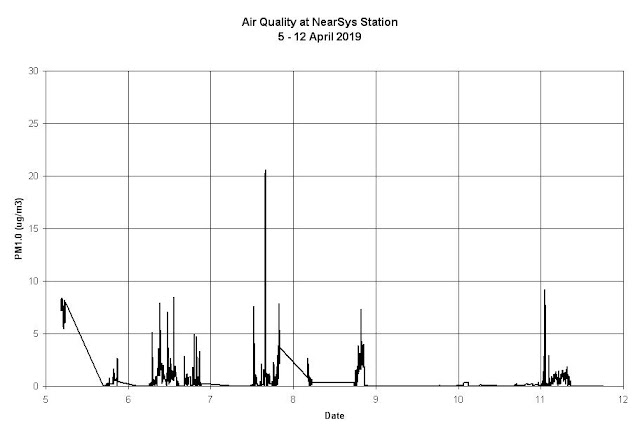 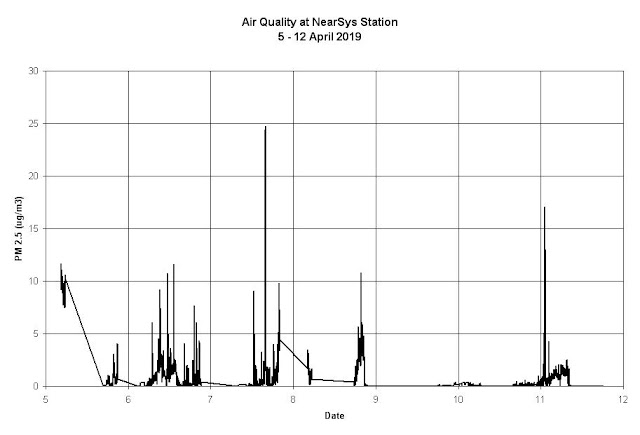 Posted by NearSys LLC at 8:37 PM No comments:

Overcast sky, but excellent visibility. Based in data from the thermal imager, I estimate the ceiling is 6,300 feet. The visibility is at least 50 miles.

Posted by NearSys LLC at 1:26 PM No comments: