Finding the Edges of Segmented Images and then Stacking them Together

I've now segmented the separate colors on a thermal image and found its edges. Let me explain what I mean in today's blog entry

Segmenting is where Matlab determines whether or not a pixel value is high enough to meet a threshold. If it is, then the pixel is changed to white. If not, then the pixel is changed to black (there is no pixel values in between). The result is a stark black and white image. There are many ways to set the threshold. Aside from arbitrarily setting  the threshold, Matlab can evaluate the intensity of the pixels in an image and their frequency, or often a pixel of that given intensity appears in the image. A graph of the frequency and intensity of pixels is called a histogram and looks like this.

Matlab can go do better at picking a threshold that we can looking at a histogram. By calculating means and variances (standard deviations squared) of pixel values, Matlab can determine an optimal threshold level for an image layer. The method is called Otsu's Method and it finds a threshold that minimizes the variances within a segmented region and maximizes the variances between the segmented regions. In other words, it splits an image into regions where the the pixels within each black regions are as close together in intensity as possible and the pixels in a white regions are as close together in intensity as possible. At the same time, the intensity of pixels between the black regions and the white regions are as far apart as possible. You can see this is making the segmented image as stark in contrast as possible.

The Matlab command to find this magic threshold value looks like this.

The input to this command is a two-dimensional array (a single color of an image) called image and the outputs are the optimal threshold value (T) and the separability measure (SM). Really, all one needs to segment an image after this command is the threshold value. Threshold (T) is a floating point number between 0 and 1. As a side note, SM is also a floating point number between 0 and 1 and the higher the value of SM, the better an image can be segmented.

Once the threshold value is known, the image is segmented using the following Matlab command.

In edge finding, Matlab looks for strong change in the intensities of two neighboring pixels. If the change in intensity is above a threshold level, then a black pixel (pixel intensity of zero) is drawn at the location of the pixels. There are many options available to the EDGE command detect edges. The most powerful method is the Canny Method and its Matlab command looks like this.

So when I ran this command, I set its values as follows.

This may not be very useful in everyday images as you can see below.

But when a image is segmented first, the detected edges look more meaningful as shown below.

Recall that the color layers of an image is just a two-dimensional array. Well, Matlab can add those arrays  together to create a single image as if they were stacked together. Where two white pixels overlap each other in the stacked layers, the sum of the pixels remains 255 (a byte can't hold a value greater than 255). Where two black pixels overlap each other, the sum of the pixels is 0. Where a black pixel overlaps a white pixel, the sum of the pixels is 255. It's apparent that stacking black and white images together through array addition creates a new image of the sums of the edges of each image being stacked. Below is an example.

To make the stacked look more like we expect to see, I inverted the colors. 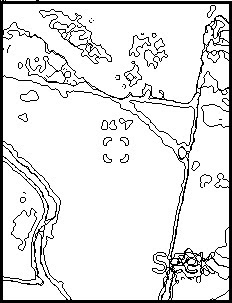 Finally, I created colored images from each layer and then concatenated them together. This turned out more difficult than I expected because each color's edge image is an array of logical values. In other words, each element in the arrays was either a 1 or  0. This creates two problems. First, the brightness of a pixel of value 0 or 1 are both very black (or close enough to black). Second, you can't concatenate three arrays of logical values. So the first step was to convert the logical array into an integer 8 array (so an array element, or pixel) could have a value of 255. I did this with the following command.

Then I multiplied each element in the integer 8 array by 255. This left the black pixels at zero and the colored pixel at 255. That command looks like this.

After completing these steps for all three layers, I could concatenate them together with this command.

It's important the order of the stacking be correct or else the product is an image where the individual layers are not shown in their proper color. when completed, the concatenation created the following picture.
Not too bad for a days work. what it all means I don't know yet. But I'll figure something out eventually.