Geiger Counter kit for Near Space

I've started my experiments with the Electronics Goldmine geiger counter kit (C6979). The kit was on special for $70 (down by $10). It operates from a nine volt battery and uses a 555 timer and transformer to boost the voltage to 600 volts. The 555 timer operates at 128 Hz. So when there's a detection of a cosmic ray, there are six (some times five) pulses during the GM tube's dead time.

Gas molecules inside a GM tube become ionized at the passage of a subatomic particle. The ionized gas lets electrons, pushed by the high voltage on the tube, pass from the wall of the GM tube to the center conductor. This makes the GM tube act like a switch at the passage of a cosmic ray. While the tube remains ionized, it's unable to detect other radiation events. How quickly the GM tube clears out this ionization is called the tube's dead time. The shorter the dead time, the more frequently the tube can detect radiation. In near space, I have detected up to 800 counts per minute. On average then, there is 75 milliseconds between detections. As long as the GM tube's dead time is less than that, it should accurately detect radiation levels in near space.

I'd like to try placing a capacitor across the GM tube to smooth out the voltage spikes. If that works, then the flight computer doesn't have to divide the number of counts by six to get the real radiation levels. Perhaps it will also let the tube clear out faster (reducing its dead time).

It's a short video about my experiments to date. Look for an article in Nuts and Volts this year.

Onwards and Upwards,
Your Near Space Guide
Posted by NearSys LLC at 9:30 AM 2 comments:

I've continued my experiments with designing small hovercraft. The video is short, but it shows I'm about ready to add a robot controller to a hovercraft. Balance is going to be a big issue. The lift fan is going to need lithium batteries, since they draw so much current.

Here's the YouTube link
http://www.youtube.com/watch?v=_ju40nRB_eE
Posted by NearSys LLC at 11:51 PM No comments:

I'm working on the base of a Hover-Bot. It's in the design stages, so only the lift factor has been checked. I have two more ducted fans on order and they'll supply the propulsive force for the Hover-Bot. My goal is to create a two dimensional simulation of satellites.

In traditional robots, when the motors are shut off, the robot stops. Not so for a "nearly" frictionless sliding robot. To get the Hover-Bot to stop, it must apply reverse thrust to counteract the initial thrust that got it moving. There's also the issue of sliding sideways.

Currently I'm investigating the amount of current the lift fan draws based on the supply voltage.

I have a movie clip that I'll post shortly.
Posted by NearSys LLC at 7:36 AM No comments:

Here's the demonstration of the new single axis robotic arm I developed. It's a simple deign that's suitable for entry level robotics competitions. In this case, the CheapBot robot is combining a line follower, beacon detector, and robotic arm to carry plastic balls from a pick up point (which is marked by an IR beacon) and carries them to a destination. Both the pick up point and the destination are marked with black tape. A robot in a game like this would score points based on the number of balls it delievered in a fixed period of time. In the case of a tie, the smaller progam (in bytes) wins.

Posted by NearSys LLC at 7:11 AM No comments: 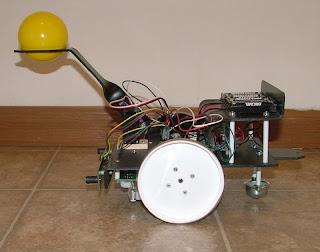 We need to be teaching and encouraging more kids to take science,math,and engineering classes. Is there a US FIRST club at your local high school? They could always use some help.
Posted by NearSys LLC at 12:45 PM No comments: