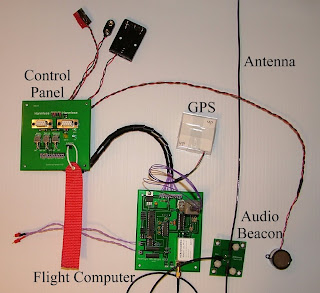 Posted by NearSys LLC at 2:37 PM No comments:

A Complete Near Space Flight Computer 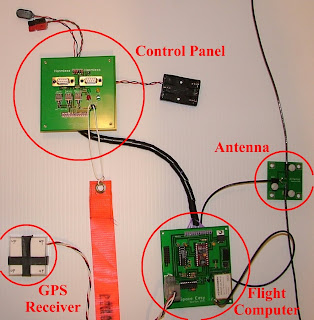 Shortly, beginners will be able to purchase a complete near space flight computer. After assemblying the kit, all you will need is a parachute, battery, and airframe. The kit will include a control panel to communicate and control the flight computer from outside the airframe, a 2m dipole antenna, GPS receiver tested to 103,000 feet, audio locator beacon, and programmable flight computer.

The first kit is based on the PICAXE-28 and the second based on the BASIC Stamp. Check the NearSys website (nearsys.com/catalog) for information as I get my updates in order. Until then, feel free to contact me through email.

Posted by NearSys LLC at 7:41 PM No comments: 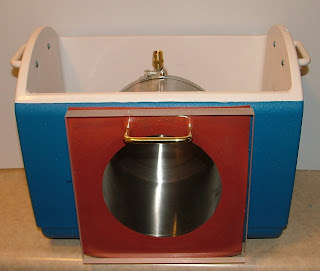 The Near Space in a Can thermal vacuum chamber is about ready for retail. The image above is missing its vacuum gauge, which is at school. Otherwise, you now get a good idea of what it will look like. The kit should be no more than $150.

Just pack the Near Space in a Can with dry ice and let it chill before loading the test subject inside. Then pump it down with your vacuum pump. The environment inside will match near space conditions.

The stainless steel canister is 7.5 inches in diameter and 7.5 inches deep. The clear plexiglass cover lets you observe the experiment inside and even video tape the test.

A future upgrade will bring wiring inside so you can communicate with experiments inside.

Posted by NearSys LLC at 3:47 PM No comments:

I completed my design of a single axis robotic arm. The servo lifts and lowers the arm like a traditional arm. What is different is the end effector that allows the arm to pick up objects. It's a wire snare, similar to the end effector on the Space Shutter robotic arm. A mini servo extends and retracts the wire snare, letting it wrap around and tighten around th object to be picked up.

Look for a magazine article (in Servo) and a kit to made available shorty.

Posted by NearSys LLC at 1:22 PM No comments:

I ran the first tests of a new thermal vacuum chamber. It's a stainless steel can with vacuum and cable ports. The can fits inside a plastic ice chest that can be packed with dry ice (see my Nuts and volts article on this subject).

The front of the chamber is sealed with thick acrylic plastic to permit observations of the interior of the chamber during testing. The cable port permits power to enter the chamber for its ultraviolet source and temperature sensor. Pressure inside the chamber is monitored with an analog pressure gauge.

Near Space in a Can will be available from NearSys in 2011 as an affordable kit.
Posted by NearSys LLC at 6:52 PM No comments:

I finally had time to figure out how to send AT commands to the Digi Xbee radios. I've worked with them previously, but wasn't comfortable enough with how I was setting the radios. Now I've got them working the way I want.

Therefore, I will shortly be offering a robot terminal kit. It will permit you to communicate with a robot using your PC. I've got an example robot set up right now. It drives and turns as instructed while confirming the communications. The robot carries a simple arm and video transmitters that is also controlled over the radio. The robot is smart, it attempts to carry out your commands as best it can. Since the robot is using a ChapBot-14, it is a little limited - so eventually, I'll interface the radio with a CheapBot-18 on an articulated robot body and more complex arm. Moon rover anyone?

I'll also create a kit to allow BalloonSats to communicate with each other in order to create near space constellations.
Posted by NearSys LLC at 6:39 PM No comments: