The temperature for April increased only slightly as the chart below shows. There were a few mornings of frost, which doesn't show in the minimum temperatures. 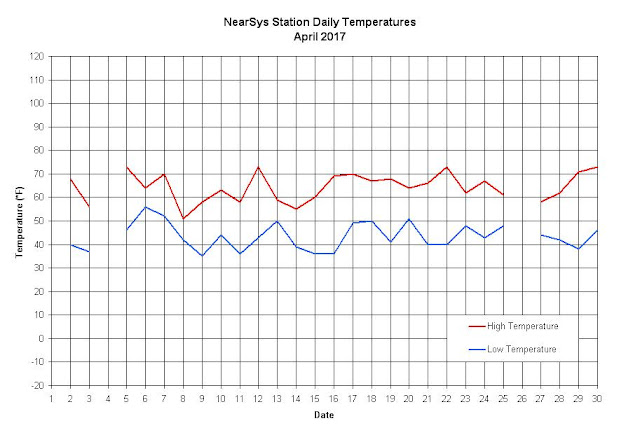 April wasn't a very wet month. But surprisingly, NearSys Station did get a small quantity of snow. However, it melted quite rapidly. 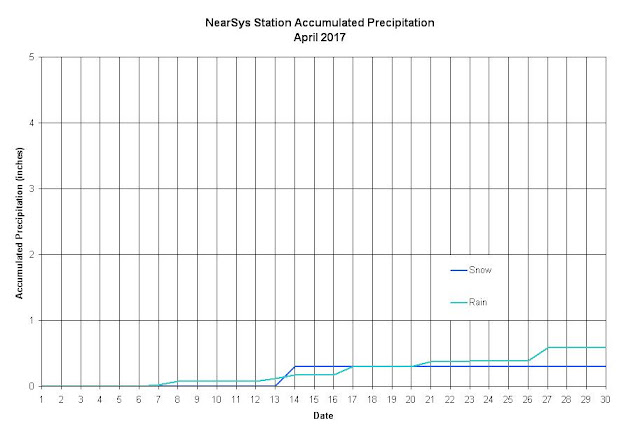 Posted by NearSys LLC at 7:07 PM No comments:

I really need to find some time to build a new weather station!
Posted by NearSys LLC at 7:00 PM No comments:

I got a picture of the Morning Star this morning. Venus recently passed close to the sun and has now reemerged as a morning planet. Look for it as you drive to work in the low east.

Posted by NearSys LLC at 6:06 AM No comments:

UAVSonde where collected at 6:00 PM. Here are the data.

I gave a one hour presentation at the Idaho State Convention today. The talk was on near space and focused on amateur radio operators. It's because of amatuer radio and APRS that modern near space exploration is open to amatuer scientists.

Presenting to hams is one way to promote both the hobby of near space and amatuer radio. Both hobbies endeavour to get young students better prepared for STEM careers.

You can read more about the Idaho State Convention at, http://www.idahostateconvention.com
Posted by NearSys LLC at 7:13 PM No comments:

UAVSonde data we're collected at 8:00 AM. Here are the data.

Snow in Boise on April 14th!

Whoa, wait a minute! The snow is really flying in Boise this morning. Here's the scene out my classroom window.

Posted by NearSys LLC at 9:53 AM No comments:

Another Meadow Lark at NearSys Station

I was able to acquire a slightly better image our our neighborhood Meadow Larks. This time because I was indoors where the Meadow Lark didn't find me a threat. I'm still hoping to get a good picture of one face on so it's yellow and black breast can be seen.

Posted by NearSys LLC at 7:12 PM No comments:

I can hear Western Meadow Larks most of the spring at NearSys Station. The problem is trying to get close to them. Today I managed to get a picture by setting my camera to it's six power zoom and walking slowly. 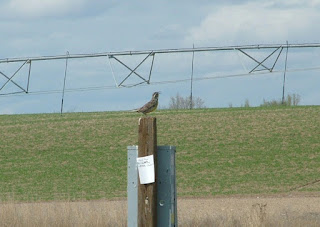 Not as good of a picture as I wanted, but that's the way it is with singing Meadow Larks.

These were collected using the old recording weather station. The new one is not completed yet. When completed, the pressure sensor will be calibrated and the unit flown in place of the current one.
Posted by NearSys LLC at 8:10 AM No comments:

Bubble wrap was one of the experiments on the first flight of NearSys in 1996. In that experiment, it was determined that bubble wrap could survive a Near space flight and provide cushioning. Bill Brown (WB8ELK) also reports he can use it for protection, including thermal protection.

In an effort to update the near space book written by NearSys, it was decided to repeat this experiment and collect some statistics. This included testing other forms of bubble wrap that did not exist in 1996.


Discussion
It appears that in many cases, air is leaking from one bubble to another. So it seems that desalination of the bubble wrap is an issue. In addition, air may have leaks from bubbles without popping the bubble. One needs to do a better job accounting for the shape the bubble wrap is in prior to starting the experiment. This will prevent a low-fill bubble being treated as a popped bubble.

It's not surprising the Air Pillows failed. They were very full of air prior to launch. The fact that they burst shows that the plastic film used to create the pillows isn't very strong.

Recommendations
The experiment should be re-performed with newer bubble wrap that has not been previously used as packing material. NearSys will next assess the ability of a layer of bubble wrap to keep its interior warmer than ambient air temperature,
Posted by NearSys LLC at 2:57 PM No comments:

NearSys arrived in Ellensburg, WA on March 30th to launch two near spacecraft for Open Window School in Bellevue, WA. The launch took place from the Rotary Park in Ellensburg on Friday morning (8:00 AM on the 31st). Both missions were flown in helium since students were involved.

The backup trackers on each near spacecraft didn't produce position reports that the APRS system could understand, so this is under investigation. Otherwise, a sufficient number of position reports from the primary trackers  were recieved, although far fewer from KD4STH-7 than KD4STH-9.

Flight NearSys 17C reached an altitude of 80,041 feet. It's last position report to enter the APRS system was around 5,000 feet AGL. Since the flight landed so far away in the mountains, it took a while to drive to the landing zone and locate the capsules. Rachel was monitoring APRS when KD4STH-7 transmitted a packet. The near spacecraft was then easily spotted 1,000 feet off the road.


Flight NearSys 17D reached an altitude of 84,668 feet and landed much closer to the launch site. It too landed in the mountains, but the roads in the landing zone are accessed by BIA roads. Google Maps was found to be inaccurate and the roads were not marked with signs. As a consequence, it took four tries to locate a road that actually took us to the landing site. When NearSys arrived, amatuer radio operator Tony Ross (K7EFS) and David Hamann were found at the near spacecraft. The recovery took so long only because of the nature of the roads in this part of Washington.

Overall, a good flight, but one that makes us aware we need better backup launch sites in Washington. Perferrably, one for east-west flights and one for north-south flights.

March continues the warming trend and is not as dry as February. 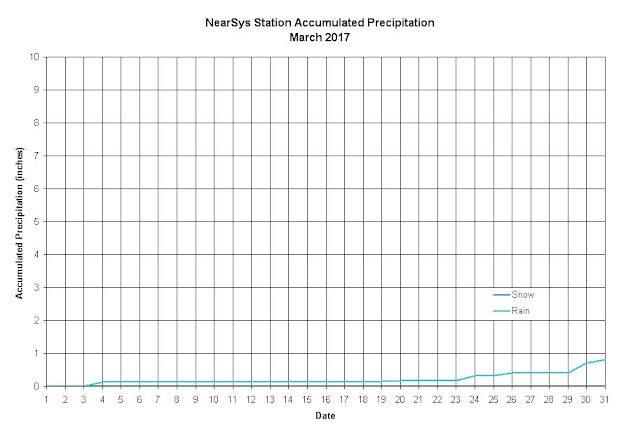 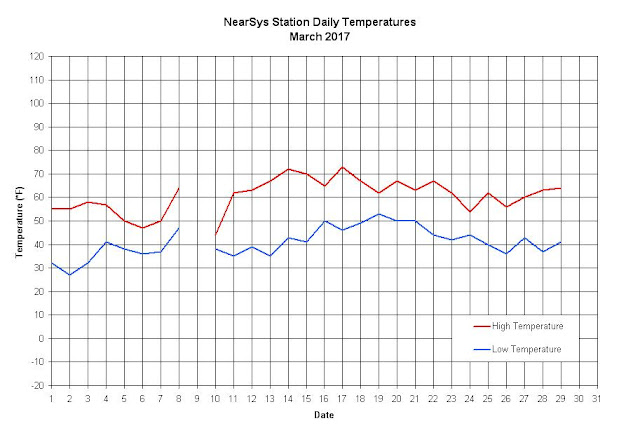 Posted by NearSys LLC at 2:07 PM No comments:

UAVSonde data were collected at 8:00 PM. Here are the data.

I haven't finished building my new UAVSonde weather station yet.
Posted by NearSys LLC at 2:01 PM No comments: