The newest near space flight computer from NearSys is the NearSpace Simple-18. It’s a PICAXE-18M2 based datalogger in parallel with a TinyTrak 3 APRS tracker. Input/output devices, like sensors, connect to the NearSpace Simple-18 through its four ports. 1. Analog Port: used to digitize the voltages of three sensors 2. Digital Port: used to interface three digital devices or sensors 3. GPS Port: shares GPS data with both the APRS tracker and the PICAXE-18M2 4. Camera Port: used to operate two cameras Analog sensors are supplied +5 volts and ground as soon as you connect them to the Analog Port. The PICAXE-18M2 can digitize sensor voltages with either eight or ten bits of resolution. The Digital Port is a two way port. You can connect input (like sensors) or output devices to this port. An example of a digital sensor is the Geiger counter. The cameras operated by this flight computer need by-passed shutter switches. Alternatively, a single camera with a by-passed shutter and power switch can be operated through the Camera Port. The flight computer also includes a Commit Pin. This is used to prevent the flight computer from recording data prior to launch. When launch is immanent, the pin is removed, signally the PICAXE to begin collecting data. Data from the four analog and digital sensors is stored in a 24LC256 I2C memory chip. This gives the flight computer enough memory to record 256 kb of data. The chip can be replaced with a larger version if additional data storage is required. The flight computer has four LED status indicators. These indicate when the flight computer has power, when the tracker side is transmitting a position report, the status of the GPS Receiver (when its connected and when it has a satellite lock), and the current status of the flight computer. The last indicator, the status indicator is a programmable bi-color LED. The PICAXE-18M2 is programmed to illuminate the LED as desired. The NearSpace Simple-18 flight computer kit also includes a two meter antenna kit. The antenna connects to the flight computer through an SMA connector. The NearSpace Simple-18 makes a great first flight computer. It’s simple plug and fly operation makes collecting data in near space quite simple. 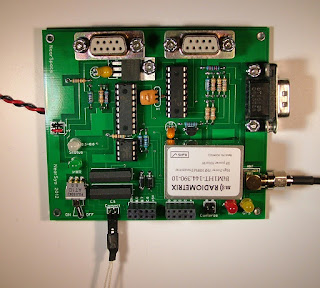 Posted by NearSys LLC at 7:04 AM No comments: 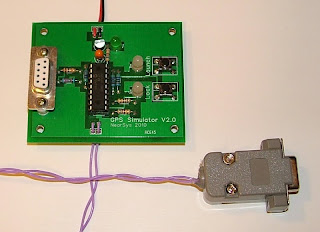 Posted by NearSys LLC at 4:19 PM No comments:

The kinetic energy of the ping pong ball is equal to the energy required to evacuate the PVC, minus losses due to friction and drag. Still, a ping pong ball capable of flying through an aluminum can is mightly impressive.

Posted by NearSys LLC at 9:12 PM No comments: 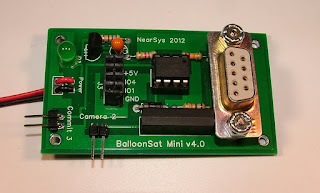 Posted by NearSys LLC at 6:29 AM No comments: