A Science Trip to the Oregon Coast

Rachel like the Oregon Coast; in fact, it's one of her favorite places on Earth. So while we visited Yachats last weekend, I took the opportunity to do some science. It as foggy and cloudy during our visit, so I'm going to need to return for a comparison during sunny conditions.

Near Infrared and Thermal Infrared Imaging
First, I took images of the ocean and coast using my near infrared (NIR) and thermal infrared (long-wave infrared (LWIR) cameras. In NIR, smooth water appears black because surface of water does not reflect solar NIR. It appears rough water is different. The images below show the water caps reflecting plenty of NIR. During a clear day, the sky is black in NIR since molecules in the atmosphere don't refract the sun's NIR. Foggy days appear much differently.


LWIR makes a temperature map, so yellow and white are hottest and blue and black are the coldest. The rocks making up the beach are warmer than the ocean, as the image below shows.


Muon Detection
Muons are subatomic particles and relatives of electrons (in fact, muons or mu mesons decay into electrons and have a half-life of 2.2 microseconds). Muons are created in cosmic ray collisions and reach the ground only because of time dilation due to their relativistic speeds. When muons strike materials called scintillators, they create tiny sparks of light. Photomultipliers, either tube or solid-state, amplify that tiny spark to a measurable voltage spike. The experiment I took to Yachats consists of two scintillaotr paddles and an Audrino to measure the voltage spikes created by muons passing through both scintillators. The graph below shows the incidence of muons over a nearly 12 hour long detector run.

Drone Flight
I also flew a drone over the beach and ocean to see what the ocean waves look like from up to 400 feet above the surface. Looking at waves from the beach gives no indication just how far out the waves extend.

Next Time
It was too foggy and cloudy to get the data I was hoping for. so perhaps some time next year I'll head back out and get the same data during a sunny day. This would also let me gather photometer data from sea level.

UAVSonde data was collected at 5:45 PM MDT. Here are the data.

Based on images recorded at 400 feet AGL, the visibility at NearSys Station is at least 50 miles. The sky looks more hazy on the ground than at 400 feet.

Posted by NearSys LLC at 5:20 PM No comments:

The ground temperature was 29 * F At 6:15 PM MDT. A thermal image of the partly cloudy skies indicates the cirrus clouds have a temperature of -22 *F.

I'm testing a new photometer head, one made from medium output LEDs rather than high power LEDs. I wanted to see if the colored lens of the LEDs would change the photometer's output.

The one difference I've noticed so far is that the red LED detector produces spiky output. The red signal only had three values with the highest output 20 times greater than the average red signal. So I've removed that from the photometer chart until I can determine what is happening.

Based on images recorded at 400 feet AGL, the visibility at NearSys Station is at least 50 miles.

The winds were high, causing the UAVSonde to tilted in compensation.

UAVSonde data were collected at 2:00 PM MDT. Here are the data.

Over 144.02 hours of observation, three thermal neutrons were detected. That's a background level of 1.04 microrem per hour over the monitoring time. 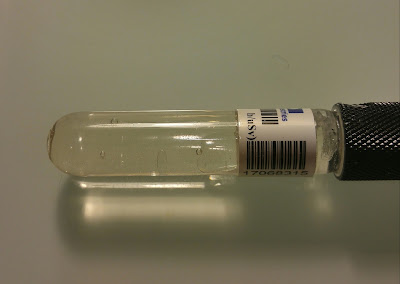 Posted by NearSys LLC at 5:27 PM No comments:

At 11:00 AM MDT, the sky above NearSys Station was 100% covered with low stratus, it has not started to rain yet. The thermal imager measured the ground temperature as 27 *F and the sky temperature at 9 * F. 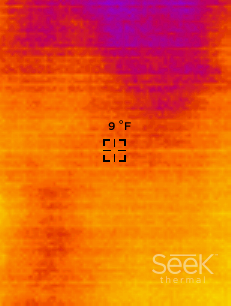 Posted by NearSys LLC at 5:24 PM No comments:

In an attempt to find out why the all sky photometer can show spikes before and after local noon, I tried another experiment today. This time the photometer was tilted and oriented to place it's DB9 connector towards the south.

The results look much better, inspite of the intermittent cloud cover this afternoon. In addition, the sky has grown hazy again.

I will need to create a consistent angle of tilt before making this a standard procedure. 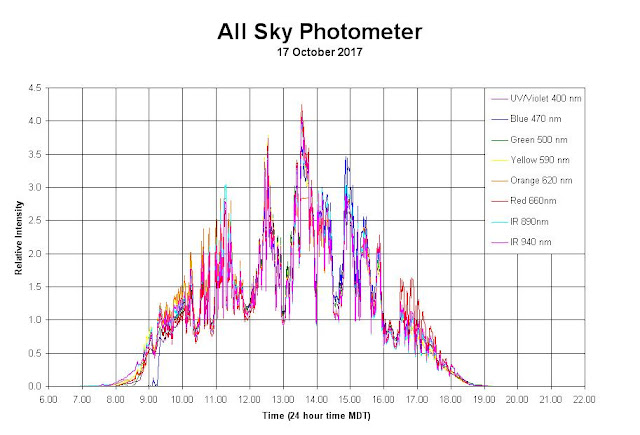 Posted by NearSys LLC at 8:27 PM No comments:

In an effort to determine what may be causing the unusual spikes in my Photometer results, I've run the Photometer almost evryday in a different orientation. Today, the Photometer was oriented with the DB9 connector pointing south.

This time the data shows two spikes, one before local noon and the other after local noon. But unlike prior data, the spikes are for different colors - blue in the morning and red in the afternoon.

Obviously, I have more tests to run. Perhaps I'll tilt the Photometer next. 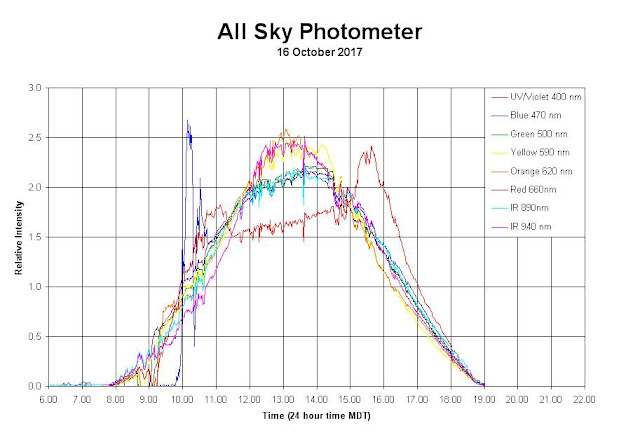 Posted by NearSys LLC at 6:44 PM No comments:

Photometer data was collected starting at 6:00 AM MDT. The sky was clear, but it was also a frosty morning. The photometer has been left out all night.

The blue spike is unique, it has never been observed before. It was also determined the photometer battery has a low voltage. Either frost or low voltage may have contributed to the blue spike. Another test will be necessary to investigate this matter.

The photometer was oriented with its DB9 connector facing North. 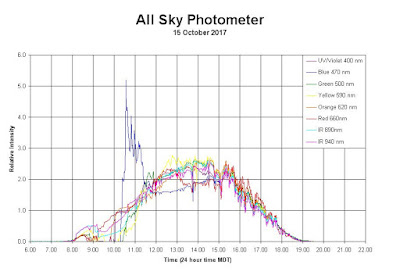 Posted by NearSys LLC at 7:13 PM No comments:

Ground and Sky ovservations were made at 4:30 PM MDT. The ground temperature was 28 *F and the cloud temperature was -25*F. Assuming a dry adiobatic lapse rate of 5.4 *F per 1,000 feet, the cirrus clouds above NearSys Station had a base of 9,800 feet.

The Boise METAR reports clear skies up to 12,000 feet.

In this case, cirrus clouds are 2,000 higher than indicated.

After 177 hours of monitoring, nine neutrons were detected. That's an exposure rate of 2.5 microrem per hour of thermal neutron radiation. 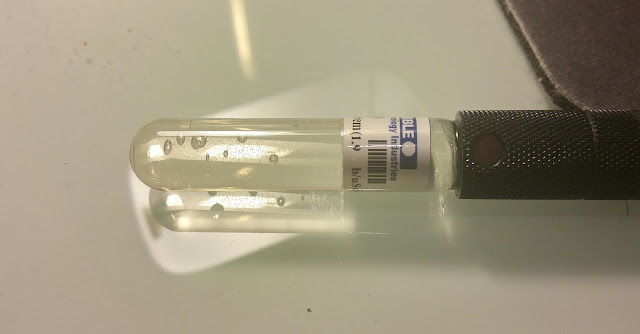 Posted by NearSys LLC at 4:44 PM No comments:

Based on images collected at an altitude of 400 feet, the visibility is 40 miles.

Posted by NearSys LLC at 6:38 PM No comments:

UAVSonde data collected at 5:35 PM MDT. Here are the data.

Ground and sky observations were made at 6:20 AM MDT using a Week Reveal thermal imager.

The ground had a temperature of 22 *F. The sky has broken stratonimbus and NearSys Station is experiencing light, intermittent rain. The cloud temperature is 7* F.

Assuming a wet adiobatic lapse rate (since it's raining) of 2.7 *F per 1,000 feet (the actual value depends on the temperature), the height to the cloud base is 5,500 feet. The Boise METAR reports broken clouds at 6,000 feet. 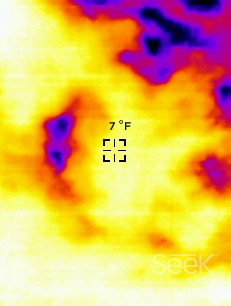 Posted by NearSys LLC at 5:42 AM No comments:

Photometer data was collected beginning at 6:00 AM MDT. This time the DB-9 connector of the photometer was oriented towards the east. The red channel shows a switch from being the lowest value to the highest as the sun approached due south.

After it stops raining, I will try orienting the photometer towards the south and the north. 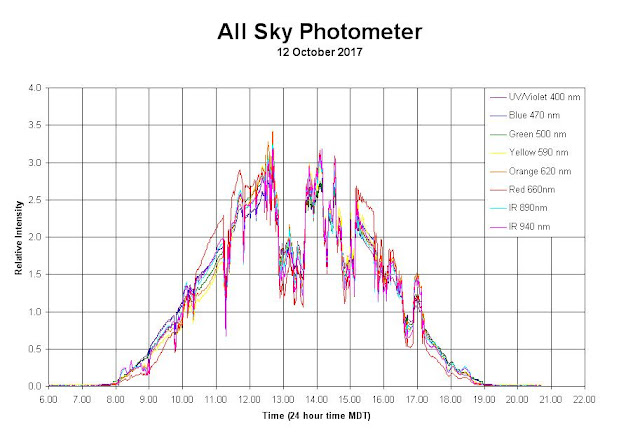 Posted by NearSys LLC at 5:28 AM No comments:

Photometer data were collected beginning at 6:00 AM MDT. The morning orange spike is back. The DB-9 connector was facing west. I'll change its direction next time and see how that effects the spike. A change was made in data collection. Now all data is recorded at 10-bit resolution and recorded as one word variables (rather than as one byte variables). Recording as larger variables makes it easier and faster to format the data.

Posted by NearSys LLC at 6:14 AM No comments:

Based on UAVSonde images taken at 400 feet AGL, the visibility at NearSys Station is over 50 miles.

UAVSonde data was collected at 8:30 AM. Here are the data.

The GPS reciever tilted during the flight and some altitude reports were lost.
Posted by NearSys LLC at 9:59 AM No comments:

Posted by NearSys LLC at 9:54 AM No comments:

I don't normally make two observations this close in tine, but felt I had too great an opportunity to pass up.

The skies above NearSys Station are broken cumulus. A check of the METAR from BOI (the Boise Airport) indicates cumulus clouds with altitudes between 4,000 and 6,000 feet.

The ground temperature at NearSys Station is 44 *F. The temperature of the cumulus clouds is 13 *F. Assuming a dry adiobatic lapse rate of 5.4 *F indicates a cloud height of 5,700 feet.

I need to see if every measure is within this level of accuracy. 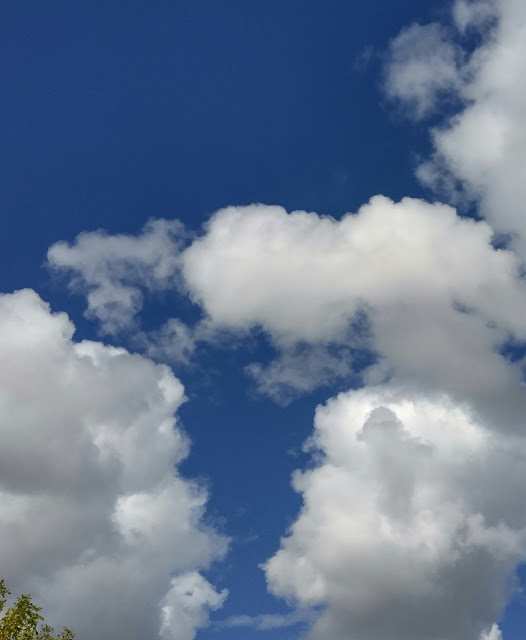 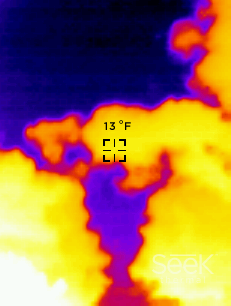 Posted by NearSys LLC at 1:04 PM No comments: