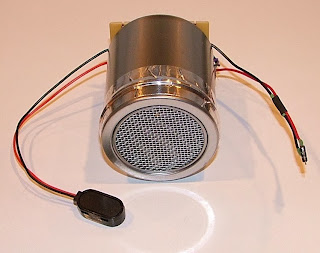 NearSys is experimenting with ion chambers as an affordable radiation detector for robots and near space. The designs under experiment can be found at Charles Wenzel's website, http://techlib.com/

Currently, the ion chamber under study is being read by the READADC command. to my surprise, I have determined that 5.5 MeV alphas from Americiunm-241 can be detected by the chamber but not 4.5 MeV alphas from Uranium-238

Posted by NearSys LLC at 5:59 PM No comments:

NearSys is testing an application based on the work of Forest Mims. In thre early 1990's. Mr. Mims published on an interesting effect, LEDs produce current when exposed to light, mosrt especially when the light has the color that the LED produces. The reason this happens is because LEDs are like little solar cells. 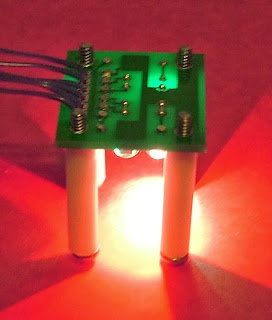 A two LED color detector being tested on red-colored floor

A robot controller using this unit measures the voltage produced by both LEDs to determine the color being illiminated. The best comparison seems to be made by multiplying the two values. A red and green seems to be most effective at distinguishing between colors as the graph below illustrates. 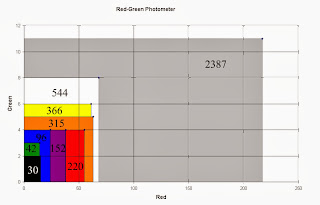 It also appears that two infrared LEDs, one 870 nm and the other 940 nm are effective at distinguishing between gloss black and flat black surfaces.

Look for a short article about this new color detector and a YouTube video in the near future. 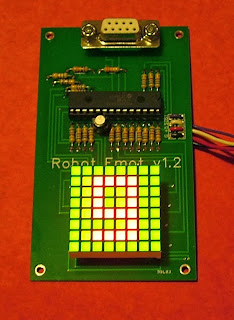 Posted by NearSys LLC at 6:19 AM No comments: