The sixth mission of 2010 for NearSys (and 83rd overall) took place 16 October 2010. Launch was from Indian Hills elementary school at 9:00 AM. Present were meteorology and physics students from Washburn University. The physics club designed the BalloonSat carried on this mission. The flight reached an altitude of 88,469 feet and was observed bursting from the ground at our stop in east Lawrence. I put together a short video that includes this film clip of the burst.

The Washburn BalloonSat carried a flight computer, weather station, and camera. Here's one of the photographs they recorded. 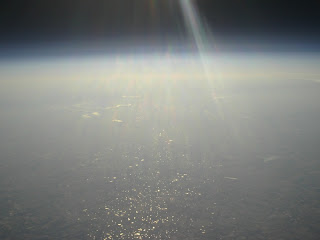