Many years ago, I read an interesting article (http://www.opticsinfobase.org/abstract.cfm?URI=ao-31-33-6965) at the Physics Department at K-State. In it, Forest Mims discussed using LEDs as frequency specific light detectors. I've played with LEDs off and on for several years before finally following Forest's recommendations and making a descent LED photometer.

While they're not quite ready yet, Nearsys will soon offer LED photometer kits for near space use. The kit comes with a PCB for two LEDs and a temperature sensor. The temperature sensor is required because the light sensitivity of LEDs is strongly dependent on their temperature. It should be an easy process to calibrate the photometer with a styrofoam box and dry ice.

This design of two LEDs and a temperature sensor permits you to compare the relative brightness of sunlight in two different portions of the spectrum. The LEDs I'm in the process of testing now are 940 nm IR and 850 nm IR. I've selected these two because according to Forest's notes, the ratio between the two can be used to measure the amount of water vapor in the air. The amount of water vapor should change dramatically during a near space flight and is an example of the remote sensing that can be performed with BalloonSats. Next up will be to find other LED combinations that will provide interesting information.

You can read more about LEDs and Forest's discovery at http://www.sas.org/tcs/weeklyIssues_2009/2009-01-02/feature1/index.html and http://www.sunandsky.org/Sun_and_Sky_Data.html. 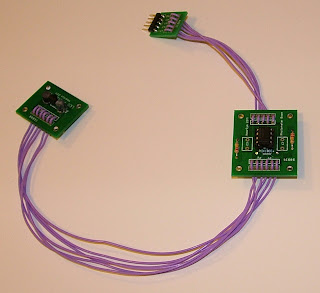 The complete photometer kit. It comes with the photometer head (with its three sensors), transconductance amp, and easy plug for connecting to a NearSys flight computer. I want to thank Mr. Forest Mims for helping me design this photometer and encouraging me to experiment with it in near space.