Ten Images from a Near Space Mission

Near Space is a region of Earth’s atmosphere above 60,000 feet (or the top of controlled air space) and below 328,000 feet (or the boundary of outer space). Most aircraft cannot fly within near space, and those that are capable of flying here are military-related and can only reach altitudes of 100,000 feet. Weather balloons can reach the lower half near space and because they are relatively cheap, they allowed amateur scientists like me to turn near space into an exciting destination for exploration. GPS receivers, amateur radio, and programmable microcontrollers are the three basic components necessary for any near space mission. Tracking and therefore recovering a near spacecraft is possible because of the combination of GPS receivers and amateur radio, but it is programmable microcontrollers that allow amateurs to operate sensors, including cameras, within this substitute for outer space. Here are ten images recorded by near spacecraft during their missions of amateur exploration. 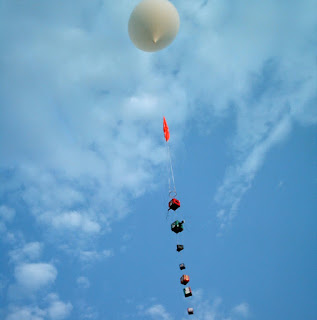 A near spacecraft is a stack of modules. The stack can easily be 30 feet tall and consists of (from the top to the bottom) a hydrogen-filled or helium-filled weather balloon, load line (connects the balloon to a parachute and prevents the burst balloon from collapsing on top of the parachute), a recovery parachute, one or more tracking modules, and experiments built into airframes called BalloonSats (balloon satellites). The balloon topping the near spacecraft is capable of lifting upwards of 15 pounds of payload and is around six feet in diameter at launch. It expands in size as the near spacecraft ascents until it reaches its maximum diameter of 20 to 25 feet. The balloon’s burst frequently occurs at an altitude between 85,000 and 100,000 feet. With a climb rate of 1,000 feet per minute, most near space ascents require 90 minutes to complete. Within a second or two after the burst, the parachute is open and the near spacecraft is descending at speeds in excess of 70 miles per hour. Denser air close to the ground slows the parachute until the near spacecraft lands at a gentle speed of ten miles per hour. With smart planning and a pinch of luck, the chase and recovery crew is present to watch the landing. 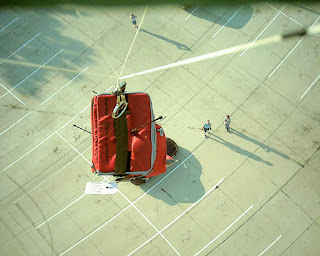 We usually program the microcontroller onboard the near spacecraft to collect data and record images at fixed intervals of time, like every 30 seconds. So it’s possible for a near spacecraft to record an image just prior to or just after launch. This near spacecraft recorded an image just a few seconds after launch. Visible in the image are three of the launch crew watching the near spacecraft they just released. Below the camera taking this image is a back-up tracking module. A GPS receiver and amateur radio are packed inside of a reusable lunch sack. Many of the commercially available electronics we use to explore near space do not like the -60 degree Fahrenheit temperatures found between the troposphere and stratosphere. This means that a reusable lunch sack makes an ideal airframe for the tracking electronics since the lunch bag includes insulation and padding. Besides, a beeping lunch sack with an antenna sticking out of it looks perfectly harmless when it lands in your front yard. 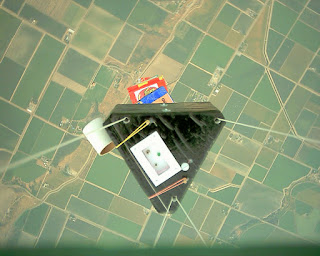 The distance across this low-altitude image is five miles, meaning it would take you at least five minutes to drive across it. We can see a low cliff cuts diagonally across the leftmost third of this image and a small creek is visible twisting its way across the lower right corner. Some of the farm sections are dark green, indicating crops here have grown thick. In other sections, the ground below the crops is clearly visible. This indicates that the crops there have not had enough time to grow in. Four student-designed BalloonSats are also visible in this image. The students responsible for them were part of a summer aeronautical camp where they learned the importance of aeronautics to the state of . The BalloonSat activity was a closure activity and in it, they collected images and temperatures from near space. If the students had more time, they could have used images like this to make maps and determine land use. 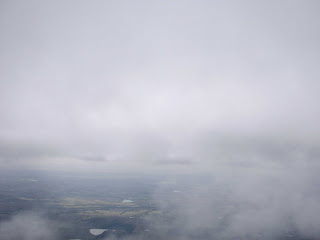 Clouds consist of tiny water droplets held aloft by a combination of their drag and rising air currents. As the near spacecraft climbs through a cloud, the sun illuminates the top and bottom of the cloud making it easy to see the ragged fluffs near the base and crown of the cloud. However, once inside a cloud, the camera only sees a grey-colored haze similar to what people see when they stand inside a fog bank. These near space images illustrate that fog is merely a cloud on the ground. A relative humidity sensor will show relative humidity levels approaching one hundred percent as the near spacecraft approaches clouds. Therefore, an onboard GPS receiver in conjunction with a relative humidity sensor is one way to determine the altitude of clouds. A temperature sensor will indicate if the cloud consists or liquid or solid water. This data along with imaging shows that clouds exist at a variety of altitudes and different shapes and compositions. 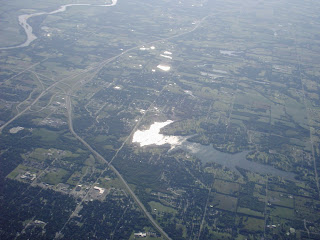 This image is over 13 miles long from front to back. The flat surface of water in this reservoir reflects sunlight near the middle of the image like a mirror. This indicates that the wind speed is so low at the surface that the water is smooth and not choppy. The near spacecraft is still low enough to make out individual buildings, since it was launched only a few minutes earlier. The buildings and parking lots are interspersed with trees and roads. The roads, we can see stop at or work their way around the reservoir. The atmosphere is deeper closer to the top of the image making the air’s haziness more apparent as you look through more atmosphere. The image is of , east of . The river at the top is the meandering . Two islands and a sand bar are visible in the river. The roads on the left edge of the image are the I-470/I-70 interchange. Images taken at an angle, rather than straight down are less useful for mapping but more interesting from an artistic point of view. The higher the near spacecraft climbs, the bluer the ground below the near spacecraft becomes. Why? It’s because more of the atmosphere is located below the near spacecraft and no longer above. The atmosphere primarily consists of molecules of oxygen and nitrogen that nearly the same size as a wavelength of blue light. One result of this match in size is that molecules in the atmosphere scatter blue wavelengths of light more strongly than they scatter red wavelengths of light. On the ground, no matter which direction you look in the sky, you are seeing blue light emitted by the sun. In near space, the same is only true when you look down. This mission took place over eastern where the land is divided into one mile squares bordered by gravel county roads. Each square mile encompasses four sections, each one half mile on a side. The small community below is next to an airport. From the scale of this image, we can determine that the runway at this airport is 7,000 feet long.

Near space missions launched 75 minutes before local sunrise experience a sunrise scene similar to the one astronauts see from their perch in Earth orbit. In near space, the sun rises up to 20 minutes earlier than on the ground below because at that height, the near spacecraft can see well over the edge of Earth. In fact, in near space the horizon can appear as much as five degrees lower than it does from the ground. So the 180 degrees of sky we see on the ground becomes 190 degrees in near space. The lack of air in near space also means that the sky overhead never turns red with the approach of dawn. All the atmospheric play of color we enjoy on the surface is compressed into a narrow band of electric color rimming Earth’s eastern horizon. Silhouettes of clouds make the edge of Earth appear rough against the coming dawn. When visible, the Morning Star, Venus is visible as a pin point of light in images like this. 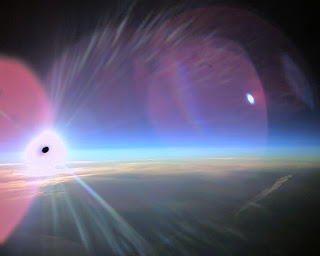 We’re accustomed to seeing the sky turn blue with the advent of sunrise. This is never the situation in near space, especially once the near spacecraft ascends above 85,000 feet. Rather, the sky overhead remains pitch black and the sun becomes an intense disk of light. The sun’s light is richer in blue and ultraviolet because the lack of air can no longer scatter it out. The digital camera taking this picture was unable to render an image of the sun due to its intensity – this is not an image of a total solar eclipse from near space. Below the near spacecraft, a contrail from a jet airplane remains long after the airplane has left the scene. Contrails are the result of water from the jet’s exhaust condensing on the particulate matter emitted by jet engines. The fact that the contrail appears this long indicates that the air at the jet’s altitude is humid. The drier the air, the more quickly the water and ice droplets evaporate back into the air and the shorter the contrail. 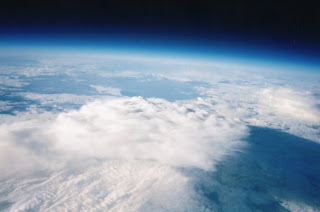 Images like these are why I got hooked on amateur near space exploration. For an astronaut wannabe like me, images from near space are the closest I’ll come to traveling into space - the near spacecraft is my space avatar. Twice now, photo lab technicians have asked if I was an astronaut when I asked them to print photographs like this. In images like these, the curvature of Earth’s horizon and the blackness of space becomes apparent. Earth is definitely a planet set in the inky blackness of airless space. There are no political boundaries visible from near space; even through the horizon is 400 or more miles away. In this image, a thunderhead rises above lower stratus clouds. For launch crews, the sky was an amorphous mass of gray and it wasn’t until after recovery that they realized storm clouds were overhead. Amateur near space exploration is open to everyone. If you want pictures taken from a very different perspective, web search for your closest near space group or consider getting an amateur radio license and starting your program.
Posted by NearSys LLC at 5:57 AM