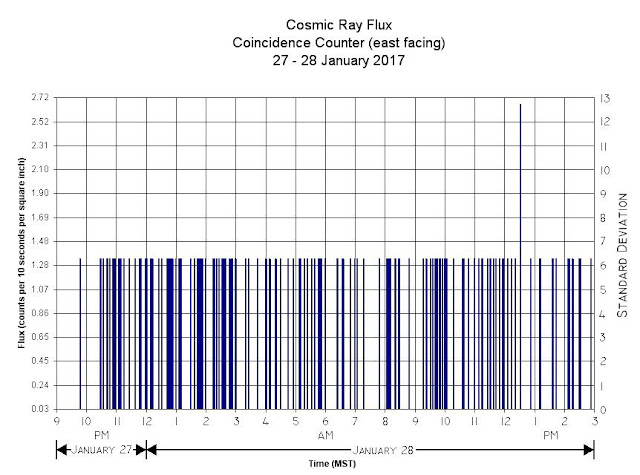 Just finished formatting the data from the latest cosmic ray monitoring session. On the 27th and 28th, the geiger counters were oriented east-west and the Coincidence Counter was connected to prevent the PICAXE-14 datalogger from counting radiation strikes unless both geiger counters detected it together.

There was a total of 151 detected strikes. This apears smaller than yesterday's, but it's in line with it since cosmic rays were monitored for six hours less.

The only significant difference is in the number of larger strikes detected. Only one large strike was detected this time compared to five the day before. I will need to get fresh batteries and test this again to see if it's a fluke. It would make sense seeing more cosmic rays from the North since that points to were Earth's magnetic field would try to direct cosmic rays to. But just because it makes sense doesn't mean that it's correct.
Posted by NearSys LLC at 10:07 PM