The first test of monitoring cosmic rays with a coincidence counter lasted 10 minutes. The test was short so the performance of the two geiger counters and coincidence counter could be tested and evaluated without waiting to see they failed after a 24 hour wait. The result of the 10 minute run is displayed below. 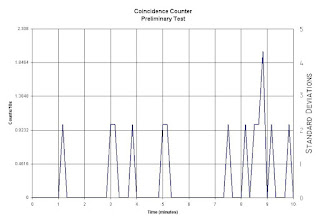 A coincidence counter only lets signals from two geiger counters be detected if the occur at the same time. Since the two counters are stacked one on top the other, only cosmic rays traveling straight down are detected. This nearly ensures that only cosmic rays are counted and not background radiation.

Below is a table of the number of detections per 10 seconds that exceeded the mean count by a number of standard deviations.

The new cosmic ray monitoring configuration is making its first 24 hour run at this time.
Posted by NearSys LLC at 8:06 PM